Mars as a subject was always present within this residency, whether it was a concept, a location or destination there has been some connection no matter how tangible to Mars. There still remains a lot of areas to explore, but for now let us consider how we see Mars. This is something I have previously explored in a project before but focusing on the Moon - by photographing Mars with an equivalent lens to the human eye, I hope to create a point - a bright light full stop at which we can consider what is real to us. I would imagine that a large part of a person's image of Mars in there mind is not completely true. I propose that it is constructed from multiple influences, with the majority being cinema... Even with exceptionally good telescopes from Earth, Mars is but an orangey/red dot in the sky.
Read More
Categories: Artist, Present Tense Future Perfect, Thomas Wynne
Post by Thomas Wynne

So it's been a little while since I started trying to make a fire 'the old way'... things that I learnt: New video work in progress - Prometheus, 2020 Second to starting fire, I managed to develop the rolls of film that I shot on location in the Derby Museum. I have taken to calling this photograph 'Artemis, 2020' after the Greek Goddess. Goddess of the Moon and the hunt, it seems fitting that an owl represent both of these concepts. No only this, but the clear perspex box in which the owl is displayed, goes further to somewhat visualise the idea of a reality within a reality.
Read More
Categories: Artist, Present Tense Future Perfect, Thomas Wynne
Post by Thomas Wynne A clairvoyant goes into a state of trance during an online development meeting. 2020.

Most Spiritualist churches run awareness classes or development groups. These group sessions give you an insight into ones psychic or mediumistic abilities. However, due to COVID these classes have been adapted so they can be communicated digitally and online. Echoing the inclusive nature of the Uk spiritualist movement.
Read More
Categories: Kelly O'Brien, Present Tense Future Perfect
Post by Kelly OBrien

One of those most recent things that I have been working on during the start of lockdown 2.0 (to which I find a certain irony as some of this work responds to ideas developed in lockdown 1) is learning to start a fire. This idea stems from the idea of Prometheus, the Greek God who stole fire and gave it to man - with this as a metaphor in mind, we have to find a new way of living, evolving and developing a way of life in the new world that we find ourselves in - whether that be Mars or Earth 2020. This may seem like a simple concept, and to those bush specialists it might be, but for a suburban late 20's person, it is proving somewhat difficult... I have been fortunate enough to achieve smoke and ash, so I can't be too far away from an ember! The board is made from dry poplar wood following the advice from a youtube video about starting fires. This may sound potentially non-credible, but does it matter?
Read More
Categories: Artist, Present Tense Future Perfect, Thomas Wynne
Post by Thomas Wynne

As you can see from my previous post I have been quite interested in the Official Astronaut portrait. With the photographs coming from a massive institution that was based in military research this idea of this particular photograph strikes me as something different to a traditional portrait. These are often the photographs that are shown at service men and women's funerals when there happens to be a disaster: Almost always in a re-entry disaster the space shuttle is burnt up and completely destroyed. The photograph then takes on a new form as the reality of the person shown in it. The second thought that strikes me is knowing what came first, the portrait and it's tradition or the disaster that caused it to be used in a funeral? Perhaps a bit of a chicken and egg situation. I do find myself feeling influenced one way as opposed to the other, but this may be influenced by something that I have seen in cinema - 'Battleship 2012' and 'Armageddon 1998' being two obvious suggestions. I am still waiting for my film to come back on this, so keep your eyes on the posts for some pictures! I'm just doing some research in to ideas of constructed imagery; in particular the work of Felicity Hammond: http://www.felicityhammond.com/ To quote her website with specific reference to the colour blue in her work "Restore to Factory Settings"

Blue is the colour of the screen when it is unable to transmit information; it is a miscommunication, an error report, a simulation or substitution. It is the print of future planning yet it is also failure, already redundant. The colour blue is corrupted, duplicitous, and houses a dual space; it is the colour of allegory. 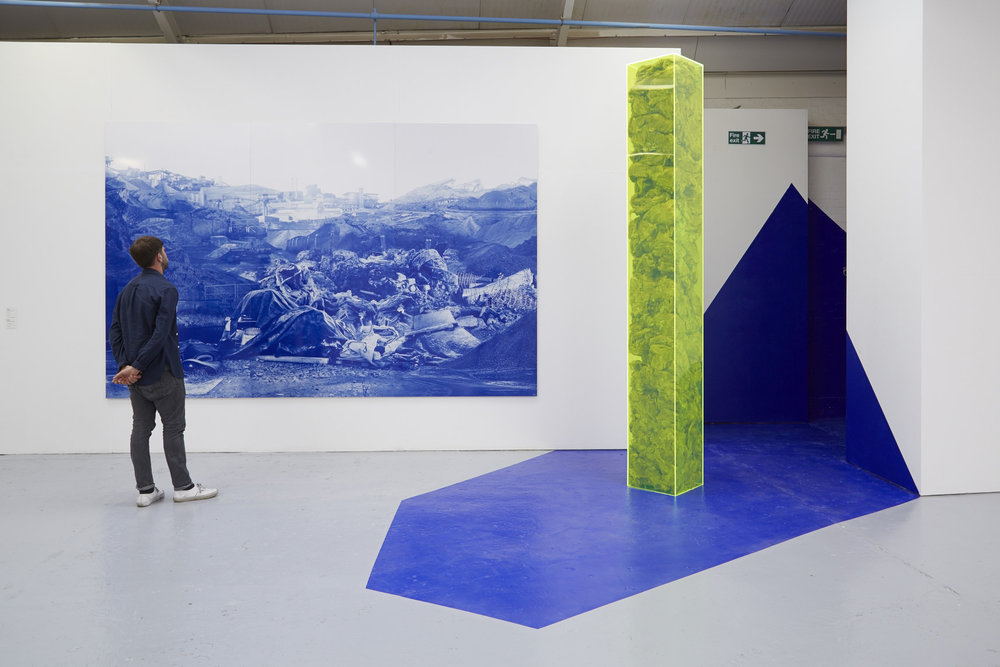 This strikes or resonates with me particularly because my small monitor has a blue screen function where a blue cast is overlayed on the screen. The idea that Hammond uses here relating to the symbolism of colours in particular settings. Also her reference to simulation or substitution... There's something there that is relevant to me but I need to decipher more... With the news that we are going into another lockdown on Thursday I've decided to continue my experimenting with new works for the residency in my art studio. This space will be my creative bubble/workspace for the duration of the lockdown this winter. Above are some screen shots from a low res video I started to play with just for fun. Play = Creativity
Read More
Categories: Kelly O'Brien, Present Tense Future Perfect
Post by Kelly OBrien

What a couple of weeks! Things and thoughts: Bees wax On of the things that has stuck with me ever since beginning research in to sci-fi and the idea of terraforming, let alone in reality, was the importance of bees. Bees pollenate flowers so that plants can reproduce, and without them the diversity of plant life or its ability to reproduce and support human life is massive diminished. Movies such as IO and the Netflix series Nightflyers feature bees prominently, so it's not a new idea. Further into my research on bees I found that it is occasionally the case that if you try and move a colony, then the colony can ultimately die. I think there are many parallels that can be drawn between the human and bee colonies, that in some way suggest a pessimism or optimism for the future of our species on a foreign planet. Archive The Derbyshire Record Office archive is a place I have been trying to get to for what seems like ages! I had loose plans at the end of 2019, albeit requiring me to be more decisive about which parts of the collection I wanted to see, and then COVID-19 came along and shut down my hopes for months... My area of interest in the archive is the Rolls-Royce rocket development department in the 1950's - 1970's. Arguably playing a large part in the origin of space exploration, the Rolls-Royce
Read More
Categories: Artist, Present Tense Future Perfect, Thomas Wynne
Post by Thomas Wynne Dominic Hawgood, Casting Out The Self.

When is fact fiction?

Whilst researching my current practice I'm currently reading Nele Wynants - When in fact fiction. Documentary art in the post truth era.  So far, so good! "Fiction can open up the world, clarify it, but also question it. Or offer a different perspective. in addition, fiction hints at a wide range of possibilities. it allows us to think up and imagine  other realities, explore new perspectives on the future, or represent something that is hard or even impossible to represent otherwise"